You are here: Home / Archives for burn fat 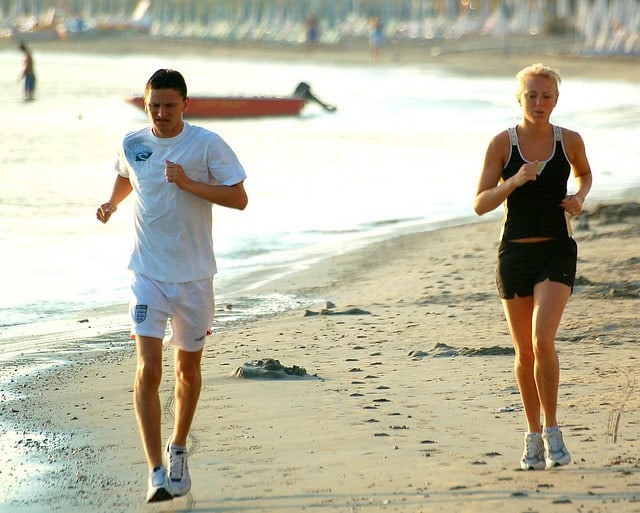 Many athletes know that it takes a long time and lots of practice and exercise to build up the physical stamina it takes to participate in their sport. Track athletes such as distance runners practice for years to build up enough stamina to run such distances. Basketball players run up and down the courts in practice all through their school years and into the pros to build up their stamina or endurance in order to play most of a game.

Perhaps no one knows what it takes to build up endurance more than a marathon runner. I’ve always wondered what would make anyone want to run a marathon considering the race is patterned after what happened to a soldier who ran that distance and then collapsed and died from the physical effects it placed on his body.

You probably aren’t a track or professional athlete, but there are still plenty of times that you wish you had more physical endurance than you currently have. How quick did you tire out when mowing the lawn, trimming the shrubs and trees or cleaning the house? What about the last time you spent time with your kids? I’ve often heard parents say they wish they had the energy of the young.

If you’re an older person like me, you may have been fairly active most of your life, but now life has slowed down and you are forced to exercise to try to get yourself back in shape or lose weight. I ended up buying a treadmill and walk at least 1.5 miles twice a day. When I started walking, I had a hard time walking half a mile at a brisk pace before tiring out. I’ve now built up the endurance and stamina to do 1.5 miles a stint, but even then, I have to really push myself to cover that distance. I know the more I walk the more weight I’ll lose and better the exercise will be on my heart, but I just haven’t built up that stamina or endurance to walk further or longer.

We hear about all kinds of miracle drugs and pills these days, but what if you could take a pill that would help build your stamina for physical exertion? Sounds like one of those quack deals? Think again.

Ronald Evans, Professor and Director of the Gene Expression Lab & Howard Hughes Medical Institute Investigator at the Salk Institute in La Jolla, California believes he may have found just such a miracle stamina drug.

But don’t get too excited yet as his research is still in the early study phase. However, his research not only promises hope to millions of us that need stamina to help with our exercising and weight loss, but it will also raise ethical questions for amateur and professional athletes.

Evans’ miracle drug, known as GW1516 was given to laboratory mice for eight weeks. At that time, the test mice and control mice were placed on a treadmill and ran until they showed signs of fatigue. The control mice averaged about 160 minutes before fatiguing and the test mice that received GW1516 ran for an average of 270 minutes.

Evans and his research team believe that GW1516 works with a specific gene that changes the body from burning the stores of sugar for energy to burning fat. The implication of this could be not only beneficial to millions who are exercising to lose weight, but the idea of burning fat as part of the sudden increase in stamina could be huge for the weight loss industry.

Evan’s commented on his findings, saying:

“If you reprogram the genetics, you can acquire that level of fitness without having to expend a lot of energy.”

According to a recent report on Evans’ research:

“It’s not clear whether the chemical would work the same way in humans. But if it did, the results from the study could one day lead to a pill that controls a network of genes, turning them on and off to selectively burn fat and sugar, much like exercise training. Such a therapy could mimic the benefits of exercise for those with limited mobility, such as the elderly, obese or physically impaired.”

“In the new study, Evans and his team built on earlier work in which they found a kind of biological sensor called PPARD that, during exercise, senses fat in the muscle and then turns genes on and off to burn fat and preserve sugar. [Dieters, Beware: 9 Myths That Can Make You Fat]”

“Previous work also showed that GW1516 interacted with that sensor, activating the same set of genes as those that would be triggered by exercise. For example, in one study, Evans and his team gave GW1516 to normal mice for four weeks and showed that it controlled their weight and insulin response. But it didn’t seem to influence endurance in sedentary mice.”

“In the new study with sedentary mice, they increased the dose of GW1516 and gave the compound over a longer period.”

“When the scientists analyzed muscle tissue from the mice, they found a few interesting things. First, the tissue did not show any of the physiological changes associated with fitness training. There was no increase in the number of blood vessels or mitochondria, the power plants in cells that generate more than 90 percent of the energy.”

The bottom line is that GW1516 may help boost stamina and help burn fat, which could be a huge benefit for weight loss, it does not seem that the drug would benefit the heart or build-up of muscle. For athletes, they need to build-up muscle. For many of us regular folk, we need to not only build-up muscle mass but we need to improve heart function. Perhaps being able to exercise longer will allow someone to build up the muscle mass and improve heart health. Guess we’ll all have to wait to find out. Running is amazing. It allows you to get a stress-reducing, endurance-boosting workout with just a pair of shoes and an open road. It also burns calories, of course. At a 10-minute per mile pace, you’ll fry about 10 calories a minute.

That’s a solid number, and if you run faster, you can burn even more. But if running isn’t your favorite activity, there are plenty of other modes of exercise that can help you torch calories at a lightning fast rate.

In general, you burn more calories by doing high-intensity weight training than you do running. Most people don’t realize this, though. That’s often because the number of calories you’re told you just burned is typically estimated from The Compendium of Physical Activities, which calculates energy expended through aerobic metabolism. That works well for low- to medium-intensity exercise, but not so well for higher-intensity activities that rely on anaerobic metabolism. This explosive exercise works the big, powerful muscles around your glutes and quads, and sends your heart into overdrive, according to research from the University of Wisconsin. In the study, participants burned 20.2 calories a minute and their average heart was 93% of its max for the course of a 20-minute workout.

The kettlebell swing works you so hard because it’s not a movement you’re used to. You’re not super efficient at it, which is taxing to your body. A 185-pound person can burn 377 calories during 30 minutes of vigorous rowing, or about 12.5 calorie per minute, reports a Harvard University study. And because you need to utilize the muscles in your arms, legs, and back for efficient strokes, it’s a great total-body trainer. Want to row like an Olympian and burn even more calories on the rower? A 180-pound person burns about 1.43 calories per burpee. So if you can hammer out at least seven a minute you’re in the double digits. But you should shoot to average at least 10 every 60 seconds, or a rate of 14.3 calories per minute.

Why? Performing just 10 reps at a fast pace can rev your metabolism as much as a 30-second, all-out bike sprint, according to a study presented at the American College of Sports Medicine annual meeting. It sounds downright crazy, it’s possible to blast 87 calories in one minute on this stationary bike that increases its resistance as you pedal harder.

The key: Give everything you have in that 60 seconds. Note: This number relies on the accuracy of the built-in AirDyne monitor, which calculates calories by converting revolutions of the fan into physical work.

Moderate-intensity rope jumping—about 100 to 120 skips per minute—burns about 13 calories a minute, according to the Compendium of Physical Activities. This mode of exercise uses more muscle groups than jogging, and challenges your balance, and coordination—especially if you practice drills that require extra hand and foot skills. If you haven’t tried this fast-growing cycling sport, you should. You can burn up to 1,500 calories an hour—or nearly 25 calories per minute—pedaling the heavy, hard-to-turn monster bikes and tackling all types of terrain, all year round.

Reality check: That kind of calorie burn depends on your fitness and strength levels, and your skill. But regardless, it’s sure to be one hell of workout. This CrossFit Workout of the Day (WOD) burns an average 13 calories per minute, according to scientists at Kennesaw State University. It’s effective because it pairs three exercises—5 pull-ups, 10 push-ups, and 15 air squats—that work different major muscle groups, and you do as many rounds as possible in 20 minutes.

So if you’re in amazing condition, you can go all-out for each one, without slowing down or stopping to recover in between. If you’re somewhat less than amazing (read: like most people), you simply rest when needed.

For example, you don’t move on to the push-up until you’ve completed 5 reps of the pull-up, even if you have to stop and start. Any routine that takes you from standing, down to the ground, and back up to standing again is an amazing calorie burner, because it really spikes the heart rate.

Zipping along on skis delivers a better heart-pounding workout compared to running at about the same pace, thanks to the fact that the sport requires you to push with your lower-body and pull with your upper.

In fact, a good cross-country ski session can burn more than 12 calories a minute, according to the Compendium of Physical Activities. That explains why Nordic Skiers consistently collapse in exhaustion at the finish line of Olympic races. No fresh snow? Look for the new Concept2 SkiErg machine at your gym.

This four-minute miracle drill burns major calories both during a workout and after. In an Auburn University at Montgomery study, participants who did eight rounds of all-out jump squats—20 seconds of hard work, separated by 10 seconds of rest—burned 13.4 calories per minute and doubled their post-exercise metabolic rate for at least 30 minutes.

From the time we were little kids, our parents were constantly on us about … END_OF_DOCUMENT_TOKEN_TO_BE_REPLACED